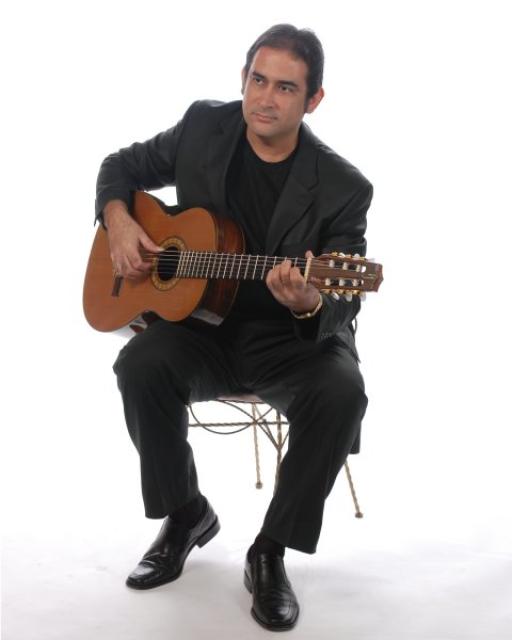 GERARDO PEREZ CAPDEVILA was born in Guantanamo, Cuba, on June 30, 1965, and, at 8 years old, began his music studies.  Two years later, Gerardo started practicing the guitar under the supervision of his new teacher, Jose A. Ramirez.  In 1980, Gerardo entered the National School of Music of Havana, where he studied under Aldo Rodriguez and Víctor Pellegrini, from Argentina.  In 1985, Gerardo was accepted by the Superior Institute of Art of Havana to further his studies, then under Jesus Ortega, leading to his graduation as “Licentiate in Music with Specialization in Guitar.”  Gerardo had master classes with the teachers Costas Cotsiolis (Greece), David Russell (Great Britain), Eliot Fisk (USA), and Héctor García (Cuba), who, as the Executive Director of the Emilio Pujol Foundation, has promoted and organized Gerardo’s recent concerts. As a teacher, Gerardo was a member of the National School of Music of Havana, Cuba, of the School of Music of Zacatecas's Autonomous University, Mexico, of the Conservatoire Milan, Laredo Institute of Cochabamba, Bolivia, and the Miami Conservatory of Music in the United States.  His pupils have obtained more than 20 national prizes besides having been accepted in several European's and American’s conservatoires. Gerardo has obtained five national prizes in Cuba, besides seven international prizes inPoland, 1988; Germany, 1989; Venezuela, 1990; Cuba, 1990; Mexico, 1994; Chile, 1996 and France, 2003.   In 1992, in Martinique, Gerardo obtained the “First Prize of Composition” with the work “Hemistiquio,” for guitar, which he co-authored with Jorge L. Sosa.  Gerardo has performed in the United States and in several countries of Europe.  He performed in the world premiere of “Concert for Guitar and Orchestra,” by the Spanish composer Carlos Cruz de Castro. Gerardo has also recorded a compact disc called "Sedruol," besides a segment for the Bolivian movie "The day that the silence died.”  In 1997, the periodical “Editorial Música Mundana Maqueda SL,” of Madrid, Spain, published "13 pieces," of the Bolivian author Willy Claure, which were adapted for solo guitar by Gerardo Perez. In 2001, Gerardo founded the “National Festival and Competition of Guitar-Cochabamba-Bolivia.”   The guitarist Eliot Fisk (USA), commented on Gerardo: "Mr. Perez possesses a virtuous technique and a natural musicality that delight the audience." Moreover, Gerardo has been playing a wide variety of music styles, such as flamenco, bossa nova, pop music, smooth jazz and traditional Cuban music in a number of events throughout South Florida.